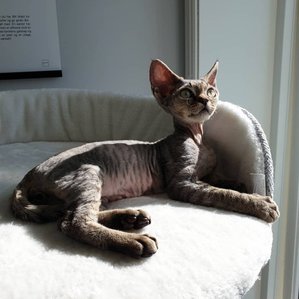 We are to sisters, Siri Jeanette and Thea Olene who share the same interest and passion for animals. Siri started to breed sacred birman in 2007, but at a cat show in 2008 the funny, sweet and curly devon rex caught her eyes. In 2013 Siri`s first devon rex moved in with here family and it did not take long time to know that this breed was 100% right for our lifestile and family life.

Siri share house with her partner, 2 kids and a miniature pinscher named Zena, and the cats.